The Facility (Based on an article by Gus Meister, February, 1999) 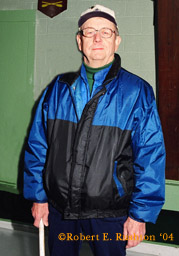 In 1930 several business men from Kentville got together and talked about forming a Curling Club. After many meetings financial support was obtained, land was purchased and a building was put up costing around $5,000. It consisted of a clubroom and a shed for three sheets of ice. At the time of the Grand Opening on Jan. 22,1931, (the ice melted that afternoon) only one of the members had ever curled before (or even seen a game played), and that when he was a boy. Mother Nature had to provide the cold for ice to be made for almost twenty years, so some years saw more curling than others. An important message going around town frequently was "Cards tonight, no ice". Curlers had to provide their own stones in those early years so shape and weight was not consistent. There were sixty nights of curling that first year. A Ladies Club was also formed the first year which made the Saturday evenings popular, added greatly to the club's finances and they assisted with the purchase of the clubs furnishings. Its to be noted the Ladies did not curl at this time.

In the late forties it was decided to invest in an ammonia system to make artificial ice. A cement floor was poured, iron pipes laid on top, and fine sand poured to cover the pipes. A York 6X6 compressor was purchased and the system installed. The cost of installing the artificial ice plant was approximately $34,000. On February 2, 1948, curling season began on artificial ice, and with newer stones which were more uniform in size and weight.

In 1953/54, the members agreed to add $10.00 to the annual dues in order to raise funds to buy fifty new stones. The funds were held in a separate account designated for the stones. In 1957, sufficient funds were on hand to purchase fifty new matched double faced curling stones at a cost of $2,700.00

In 1965 a new two story club room was built, with three windows for viewing the ice. In 1972 the old ice shed was torn down, and the present one built with four lanes of curling ice, men's and ladies locker rooms, games & storage rooms, another window installed downstairs and the windows installed upstairs so curling could be viewed from both floors. Total cost of the project was approximately $76,000. In November of 1972, the old iron pipes under the ice were replaced with plastic, and covered with cement. In the 1972/73 season, a fourth set of curling stones (16) was purchased at a cost of $5700 for the fourth sheet. In the late 70's four mirrors were placed over the house opposite the lounge. We are the only club east of Quebec with this feature, as far as we know.

The shareholders are still involved in the policy making and financial responsibility of the club, but the executive runs the every day activities for the members. This was the case until October 16, 2013 when shareholders decided to dissolve the corporation and transfer the governance of its net assets to the active membership of the club operating under the Societies Act of Nova Scotia. You can find the full story here.

In the early days only men curled, but in the early fifties the women rented the ice in the afternoons and formed the Women's Curling Club. They were a very important part of our system and contributed much to the success of our club functions. Later they began to curl in the evenings with the men. Now both have joined together and are known only as the Glooscap Curling Club.

Prior to 1982, the Late Albert Lake attempted to form a Senior Men's Group which proved unsuccessful as the Senior Men did want a set schedule. In 1982, the Late Bryon Carson approached the Club President, Gus Meister, inquiring if there was ice time available in the mornings. Bryson placed a poster at the golf club to see if there would be any interest in Senior's curling. Within one week they had approximately a dozen names and the Senior Men's Group was subsequently formed. The Senior Men curled Monday, Wednesday & Friday mornings and the ladies could curl on Tuesday & Thursday mornings if they so wished.

Curling started in mid October of 1982 and it was necessary to use the 4 sheets. Within a short period of time the number of Senior Men Members had increased significantly where it became necessary to try and have two draws. Then they tried to have the Senior Men curl on only two of the three mornings in an attempt to accomodate everyone. The men did not like the scheduling aspect and after one year, membership was declining. The Men got together and it was decided to try the present honour system whereby all the Men's names were put on a tag & hung on the present day board. This provided the members with the scheduling flexibility they were desiring. If members wanted to curl on certain days, they would take their tag off the board & put it on a table and a volunteer would make up the teams. If there were more than 32 players, 5 man teams or occasionally 6 men teams would be formed.

Playing positions are rotated meaning after playing two ends with 4 men teams, the skip would move to the position of lead and everyone else would move up one position. In this way all members would play the four positions. In the event of a 5 man team, the rotation occurs after each end with the skip coming off the ice to sit behind the glass, have a coffee, tell lies and coach the teams on how they should play the shots. The player sitting out the end would come on to play the lead position. The remaining team members move up one position. On occasion 6 man teams are required which results in the skip & mate leaving the ice after playing their end. The 2 players sitting behind the glass come on to play lead & second with the original lead & second moving up to play mate & skip. The second time when the two players come on to play, they alternate in the lead & second position thereby everyone gets to play all four positions. This is the same playing format in use today. The Senior Men seem to find this method with no set scheduling to be the most enjoyable. If a member does not feel like curling a certain day, his name tag remains on the board.

Members, tell your friends about the great fellowship, exercise & how everyone enjoys our senior mornings. Invite your non curling friends to the club to meet a great bunch of guys.

Criteria to be a senior member - You have to be 50 years of age or older, bring along a clean pair of shoe rubbers, gloves & dress warmly. Curling starts at 9:00 AM to 11:30 AM on Monday, Wednesday & Friday. The group has several breakfasts, pizza parties and two banquets,(Xmas & closing), per curling season. It's a very inexpensive sport and a great way to spend the winter months from October to March 31st.

The Year of the Flood

In 1984, Glooscap hosted The Labatt Tankard. Play started on a Friday and late Saturday night, (2-3 AM), a rise in the temperature resulted in serious flooding of the club rooms, ice surface, the main room behind the glass, the front entrance and the parking lot. The Sunday draws had to be relocated to The Wolfville Curling Club. Many Glooscap members under the direction of Jack Balsor, Chair of the House Committee and Gus Meister, Chair of the Ice Committee, worked around the clock to restore the club house and ice. At that time, Glooscap did not have the ice equipment it has in 2006. It took a huge amount of labour to restore the ice to playable condition. Monday morning play resumed at Glooscap and by all reports, the ice was very good. Ragnar Kamp's team from New Glasgow won the Provincial Title.

Glooscap hosted the Provincial Playdown in 1969 at the Kentville Centennial Arena which was rented from the Town for $1,500.00. This was the first time a Provincial Playdown was held in an arena and its believed to be the first liquor license to be issued by The Nova Scotia Liquor Commission for an open bar in an arena. The Tankard was played in the coldest week of the winter, 12 to 18 degrees below zero fahrenheit for the entire event. In spite of the cold conditions, the event was very successful financially and had higher than expected attendence. Peter Hope's team out of Dartmouth won the Tankard and right to represent Nova Scotia at the Brier.

The McLellan Cup (Based on an article by Gus Meister, March, 2000)

This is the oldest continuously curled for challenge trophy in curling in the world. This valuable trophy was first competed for in an inter-Provincial Bonspiel between the New Brunswick and Nova Scotia Branches at Moncton in 1887. It was the gift of the Honourable D. McLellan, Provincial Secretary of N.B.,1883, and Member of the Legislative Council to 1890.

Glooscap Curling Club has been involved in playing for the McLellan since the 1966/67 curling season. We challenge with 3 teams on a Wednesday afternoon. The winner then has to defend against other clubs for as long as they keep the trophy. This is such a popular challenge that a club has to give their intentions to challenge almost a year ahead of time.

When it first started 21 ends were played; then 18 ends and now we play 14 ends. At first the winning team had to keep on hosting until they lost, but that was changed in the 1980's.

The host club provides a lunch when the curlers arrive and then we start curling at 1 pm. A break is taken mid afternoon. After curling is over the host club provides a dinner. The winner is decided by a total score of all three teams, and the winner then has to meet the challenge the following week according to the schedule. You may have to go to N.B., P.E.I., or some other club in Nova Scotia.

Glooscap over the years has represented themselves very well in winning and hosting this special event. For example in 2000 our club challenged and won the cup in February, successfully met challenges in the following weeks from Bridgewater and Westville, finally losing it to Sackville in March.

(Note: For more information on playing for this cup see Gus and/or watch for notices on the bulletin boards at the Club.)